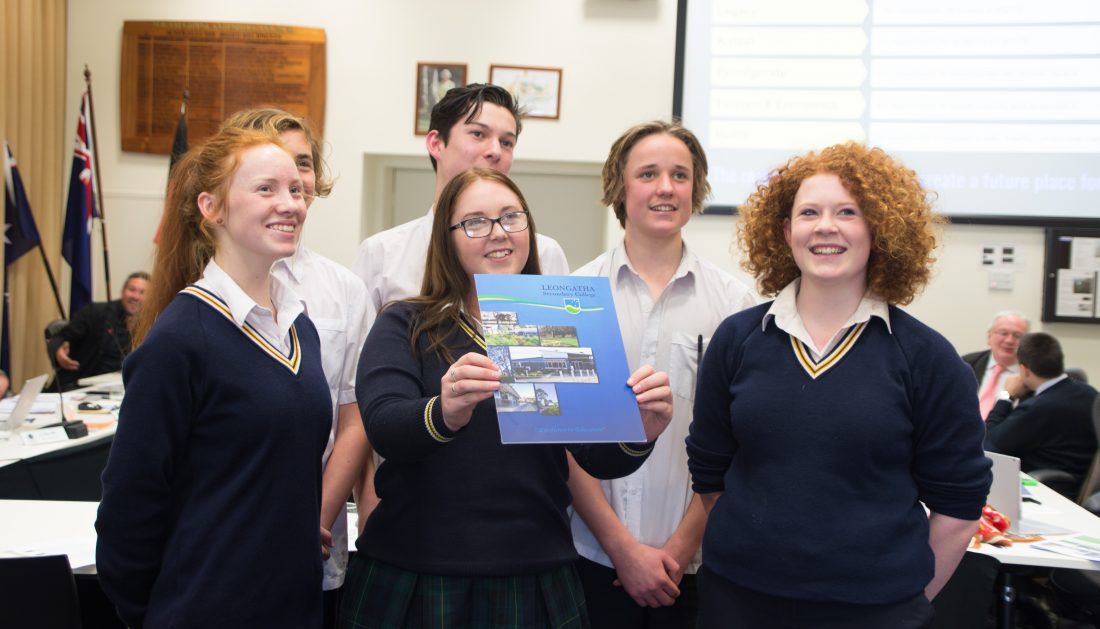 LSC Global Classroom students have been praised by Cr Ray Agento following their presentations to Council last week. The Mayor congratulated the students on their professional, articulate and well thought-out vision for the future use of the railway site precinct. C Agento also added “If these students are a representation of the calibre of our youth in South Gippsland I can honestly say that our future is in good hands.”

Please see the full report below.

The Leongatha railway site is a project that has brought quite a bit of input from a broad cross section of the community. The opportunity to create something of this size in the centre of our most significant town – in terms of both population and economics – probably only comes along once in a generation. For that reason it is so important for us as the elected representatives to hear from all members of the community. We make our decisions based on the best information available to us: the more people we hear from the better and more representative our decisions will be.

Last Wednesday my fellow Councillors and I were privileged to be addressed by students from the Leongatha Secondary College. The Year 9 and 10 students from the school’s Broadening Horizons class presented on their options for the disused railway site. It’s not often that the Council is able to interact with so many of our young citizens at one time and it would be an understatement to say that the Councillors were impressed with the presentation. Each of the students professionally articulated a well thought-out vision for the future use of the precinct.

According to the students, Council has the opportunity to make this site into a landmark park and playspace. They pitched the idea of Council investing in something that will put Leongatha on the map, turning the town into a place that people come to and not just drive through. The students presented a vision of a destination playground like the one at the National Arboretum in Canberra or the giant slide in Bairnsdale. They even suggested a huge wooden cow that could be entered at Bair Street with a slide that delivered kids (and maybe the young at heart!) down to the park level. They presented an image of a space so full of activity that it stimulated economic growth in Leongatha and shifted it from being a service town that is predominantly closed from midday Saturday to a town that is a thriving weekend destination.

I must say that it was a very convincing argument. Their ideas covered not just the playground but all aspects of the site including open space with informal sports facilities, a traffic school, exercise equipment, the footbridge linking the site to Bair Street and entertainment spaces. It was quite clear that these students had spent many hours not only preparing for the presentation and its delivery, but on the actual project itself: a truly professional approach.

If these students are a representation of the calibre of our youth in South Gippsland I can honestly say that our future is in good hands.